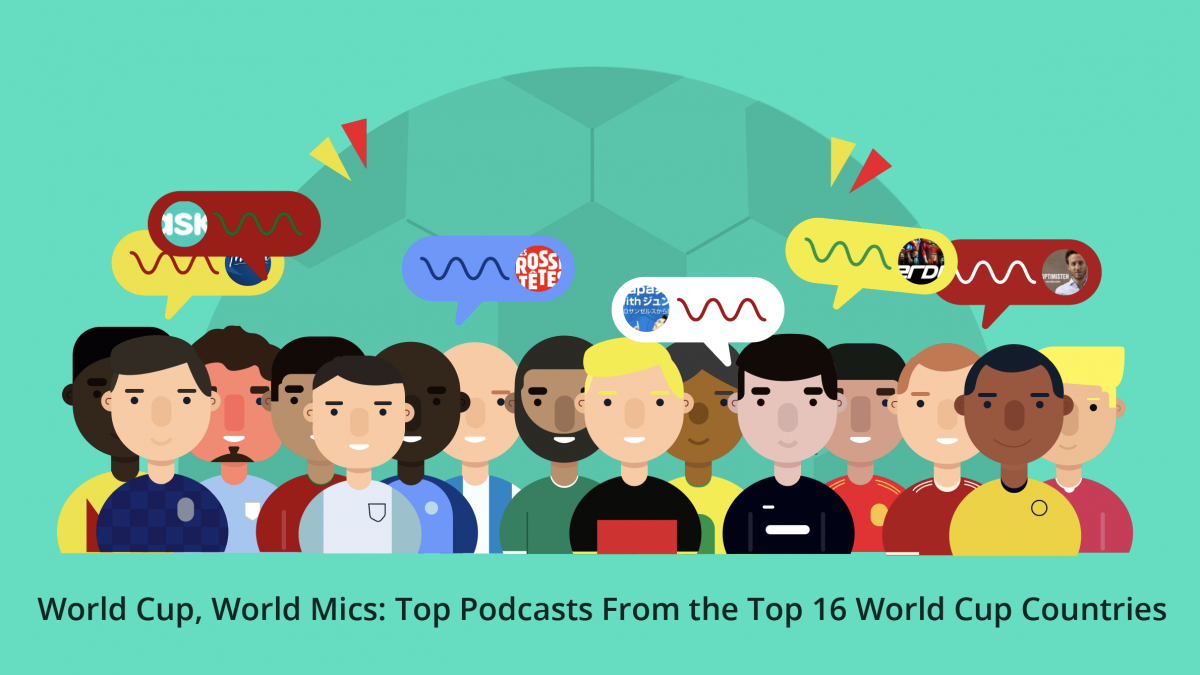 The World Cup is bursting with excitement. Part of the thrill lies in the frequency – with just one tournament every four years, there’s plenty of time for the hype to build. The best athletes from each country compete on a worldwide stage. With a sense of national pride on the line, the stakes are even higher than in a normal season.

Perhaps the coolest thing about the World Cup is how it brings countries together. You get fans from all walks of life joining forces to root for their team, and maybe they’ll even find themselves next to a person who’s supporting another country. That sense of togetherness certainly applies to podcasts, which are enjoyed by folks all over the world. Have you ever wondered what’s popular in Brazil? Or which podcast is tops in Switzerland? Well, we’re diving in to discover which podcasts from the World Cup’s knockout stage are topping the charts in each country.

Note: These selections are taken from the “Top Podcasts” section of its respective country’s iTunes store podcast pages.

Felipe Pigna recounts historical events from around the world, adding in interviews and present day context. Pigna offers differing ideas and viewpoints and his relaxing, easy-to-follow narration is a highlight for many listeners.

Hosts Koen Fillet and Sven Speybrouck chat with guests about science, history, and society. You know you’re getting a lot of info packed into each episode, as the average runtime is about an hour and 45 minutes.

The aptly named Jovem Nerd hosts this weekly podcast that takes a lighter look at topics and issues around the world. Recent episodes discussed the myths and realities of the stock market, why you shouldn’t celebrate birthdays, and the power and joy that can come from crushing the dreams of children.

International artist Thalía dips her toes into the world of podcasting with Conexión Thalía. The podcast interviews prominent Latin American figures who are making a mark in the world with their work and dedication to social causes. The show also welcomes comments and suggestions from fans via its social networks.

Much like the rest of the world, Croatian listeners can’t seem to get enough of Joe Rogan. Folks just starting to listen have more than 1100 episodes and 2500 hours of content at their disposal. And in true podcast pioneering fashion, original producer and co-host Brian Redban had zero audio engineering experience, so he taught himself how to set up microphones and run a mixing board.

Do you ever feel like the world is crumbling all around you? Well, perhaps you’d like to meet Danish host Esben Bjerre, whose new podcast Optimisten looks to flip pessimistic thoughts on their head. Bjerre takes a self-proclaimed “heavenly naive” approach to eliminating hunger and poverty, reducing inequalities, ensuring good education, improved health, and sustainable economic growth. Can a strong desire and optimistic outlook help change the world?

England – Love Island: The Morning After

Scottish TV star Arielle Free hosts this recap of Love Island, one of the more popular television shows in the UK. Fans of the Harry Potter films may have spotted Free in Harry Potter in The Goblet of Fire, though you won’t get any wizardry updates here — just interviews with dismissed islanders (sometimes while gorging on candy) and predictions for future episodes.

A daily French radio program that began airing in 1977, Les Grosses Têtes has nicely converted to a podcast. Show segments include hard-hitting news and cultural topics, audience questions, and interviews with guests that also include some mild roasting.

Arguably the most educational podcast on this list, audience members can practice English with conversations delivered from both Los Angeles and Japan. Native speakers talk about their daily tasks, while episodes feature both English and Japanese commentaries. In addition to hearing interesting stories, it’s a useful tool for improving listening and speaking skills.

La Corneta is a daily infotainment program pairing news with entertainment. Hosts Eduardo Videgaray and Jose Ramón San Cristobal join forces every weekday to share the latest celebrity updates. A cool feature of the show is that, in addition to the full episode, each segment is released individually for quicker listens of 10 to 15 minutes.

One of the more interactive podcasts on this list, ask.tm invites listeners to participate by asking questions on Twitter. Hosted by comedian Pedro Teixeira da Mota, the answers tend to have a more comical slant than your standard Q&A.

Journalists Ekaterina Krongauz and Andrei Babitsky host this podcast, which means “matter of chance” in English. The show looks at examples of how ethics change in the modern world and where journalists and storytellers have to draw the line when things aren’t so black and white.

Host David Broncano travels throughout Spain to investigate a variety of issues with a humorous slant. Recent episodes cover a thorough review of the bathrooms in the Valley of the Fallen, and training a pig to count bitcoin.

With over a million listens per week, Sweden’s P3 Dokumentär is at the top of the charts in the Scandinavian country. Created by Kristofer Hansson and Fredrik Johnsson, the show interviews people who were present during both major and local historical events. The first episode of the documentary covered the assassination of former Swedish Prime Minister Olof Palme – a case which remains unsolved more than 30 years later.

With the first episode airing in 1945, this German program is the oldest political broadcast of its network, Radio SRF. Of course, it hasn’t been around for nearly as long in podcast form, but “Echo of Time” provides listeners with news, reports, interviews, and analysis of current affairs.

The C.G. Jung Institute of Chicago houses a library with four decades worth of lectures focusing on individual and community well-being and culture. Speakers include a variety of philosophers and psychological thought leaders, such as Robert Moore, June Singer, and Murray Stein.