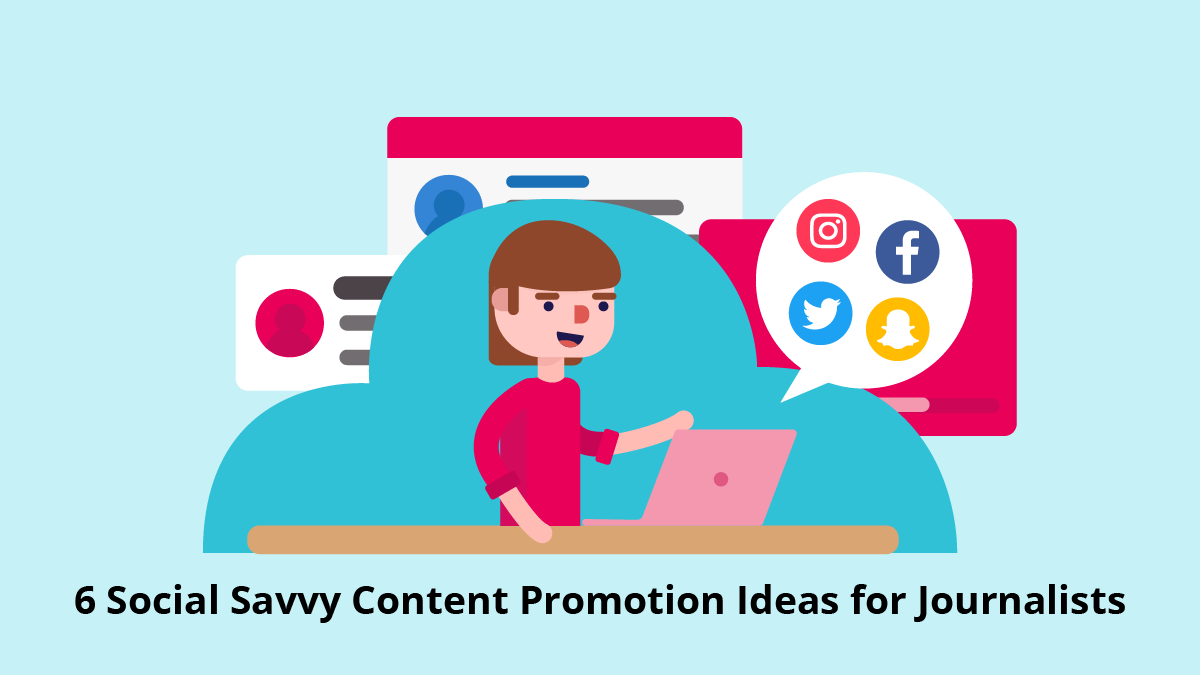 From crowdsourcing ideas to publishing content, social media has become a core component of the journalistic process.

There’s just one problem: Most journalists do not feel social media is positively impacting their industry.

Only 42% of journalists believe social media has played a positive impact on journalism, according to a 2017 Cision study.

Still, journalists and their audiences are spending more time than ever on social channels – indicating there’s ample opportunity to get more out of these platforms. If you’re a journalist who’s struggling to make your content stand out amid the viral #fakenews pieces, fear not. We’ve compiled six ideas to boost social content promotion for journalists.

Does your story feature an interesting statistic or a thought-provoking quote? Turn it into an eye-catching graphic for social. Audiences are significantly more likely to engage with content that has a visual element attached to it. They’re more likely to remember it, too.

According to research from Venngage, visual content is 40X more likely to get shared on social media than other types of content. Visual posts also get 94% more views when compared to plain text posts.

Pro tip: If you don’t have easy access to a graphic designer, no problem. Free apps such as Canva are turning the most novice creators into professional visual artists. In fact, that’s how the image above was made.

Does your article or blog post only scratch the surface of the topic you’re discussing? Secure an interviewee and conduct a live interview on Facebook. This is a surefire method to direct more traffic back to your site.

Because of how people interact with live video on Facebook, the platform prioritizes this type of content on users’ news feeds. Adam Mosseri, Head of News Feed at Facebook, wrote in January that live videos generate more discussion and engagement among people who view them. “In fact, live videos on average get six times as many interactions as regular videos,” he said.

It seems like a win-win situation for publishers, but the vast majority have not delved into live video yet. According to Buffer’s “The State of Social 2018” report, only 31% of content marketers have used live video on Facebook. This is a massive untapped opportunity.

Pro tip: Let your followers know you’ll be broadcasting ahead of time, so they pencil you in. Facebook recommends giving folks a one-day notice.

People want to be acknowledged by brands, publishers and journalists. So, give the people what they want.

Twitter polls are a fantastic way to do it. They don’t even have to link back to a particular story. Polls serve as an effective way to interact with followers, build community and possibly source ideas for future pieces of content.

Take a note from this local journalist in Texas:

More than 5800 votes in my #NationalTexasDay poll! I’m not surprised by the results 🍔 #khou11 @Whataburger pic.twitter.com/USjb3zgbUg

Pro tip: Include hashtags with the poll – making it more discoverable on Twitter.

If you’re a journalist who isn’t optimizing use of hashtags, now is the time. They’re the perfect way to help new people discover your content and join the discussion. But there’s a fine line.

Here are some key things to consider:

Pro tip: A great way to drive more people to your content is to jump on trending topics like #NationalIceCreamDay or #WorldCup. Just make sure to research the topic before tweeting, or you’ll end up trending for the wrong reasons.

As a journalist, you spend a lot of time crafting your content so it resonates with your audience. It makes sense that you should think strategically about when you share it, too.

This cheat sheet from CoSchedule is a handy way to remember the best times to engage with social audiences. Highlights include:

Pro tip: Don’t be afraid to share the same piece of content over several days. Share the link with a different message or visual and measure which one drives the most engagement.

Put It into Action

If you’re among the journalists who feel social media doesn’t positively impact the industry, you have the power to make a shift by optimizing social sharing.

Stephanie is a content strategist and freelance writer based in the U.S. Her favorite topics to cover are digital marketing trends, demographics, and travel. Stephanie earned her bachelor's degree in journalism from Temple University.